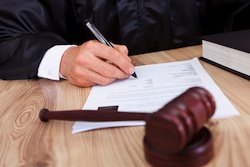 In addition to recovering damages for things like lost wages and emotional distress, there can be are other remedies available to employees who win employment law cases. Below is a brief overview of some of the most common non-economic remedies.

Reinstatement is when your former employer is ordered to rehire you for the position you previously held (or an equivalent one) in a wrongful termination case. It is a substitute for damages for your future lost wages and benefits, also known as front pay. Although reinstatement often is requested, it is much more common that a court will award money damages instead.

Similar to reinstatement, instatement occurs when an employer to which you applied for a job is forced to hire you. It can be awarded in a failure to hire case as an alternative to, or in addition to, ordering an employer to pay damages for your lost salary and benefits.

Likewise, in a failure to promote case, the judge can order your employer to give you the promotion you were wrongfully denied, including any associated raise and increase in benefits.

If you win an employment lawsuit and the court requires your employer to reinstate or promote you, or overturns a wrongful suspension, you are likely to be entitled to recover any lost seniority. This can be significant if your company uses seniority to calculate your severance pay, pension or other retirement benefits, to determine how much vacation time or other paid time off you receive, or to decide whose job is eliminated in a reduction in force.

An injunction is a court order prohibiting someone from doing something. In an employment law case, a court could issue an injunction prohibiting your former employer from discriminating, harassing or retaliating against you, or from engaging in some other illegal behavior.

In some situations, a court could order an employer to provide anti-harassment, anti-discrimination, or sensitivity training to some or all of its employees as a remedy to minimize the likelihood of similar misconduct occurring again.

Several employment laws, including New Jersey’s whistleblower law, the Conscientious Employee Protection Act ("CEPA"), and the New Jersey Family Leave Act ("NJFLA"), provide for civil fines against employers that violate them. These laws usually set the maximum amount of the fine that can be assessed. The fines are payable to the state or a state agency, rather than to the employee.

Requiring Your Employer to Fire the Wrongdoer

While many employees hope the wrongdoer will be fired because they filed a lawsuit, this remedy is rarely (if ever) awarded by a court. While it might be possible for a court to order your former employer to fire the employee who violated the law, judges usually do not want to make personnel decisions for employers.

However, if your lawsuit uncovers serious enough wrongdoing by your supervisor or another employee, it is at least possible the company will fire that employee as a result.

A declaratory judgment involves a judge ruling whether certain conduct would violate a law or other legal requirement, such as a contract. One of the most common examples in the context of employment law is when a judge declares a non-compete agreement unenforceable, or rules that if you accept a particular job you would not be violating your non-compete agreement.

To learn more about the remedies available to employees who win employment law cases, or any other employment law rights in New Jersey or New York law, please feel free to contact us online or call us at (973) 744-4000 to schedule a consultation with one of our attorneys.