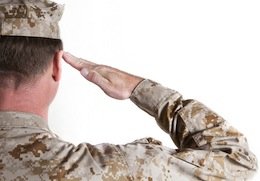 In New York and New Jersey, workplace discrimination on the basis of past or present military status is illegal. If you have experienced military status discrimination at work, meaning you were treated worse because you are a member or veteran of the United States Army, Navy, Air Force, Marine Corps, Coast Guard, National Guard or Air National Guard, you can learn about your legal rights and options by talking to one of our knowledgeable New Jersey employment lawyers about your situation.

If you have experienced workplace discrimination due to your current or past military service, you should consider speaking with an experienced employment law attorney. Any of the following actions may be considered unlawful discrimination if based on your veteran or military status:

Both individuals currently serving in the military and veterans are protected by state and federal anti-discrimination laws. The Uniformed Service Employment and Reemployment Rights Act ("USERRA") is one of those laws. In addition to prohibiting military status discrimination at work, under many circumstances it guarantees members of the military the right to return to the same civilian job they held before their military service.

The employment attorneys in our New Jersey law firm represent workers who have experienced discrimination based on their service in the military.

Under the Family & Medical Leave Act ("FMLA") eligible employees can take up to 26 weeks off from work per year to care for a serious line of duty injury or illness of their spouse, son, daughter, parent or next of kin who is a member of the Armed Forces, including the National Guard or Reserves. This is called a "Military Caregiver Leave."

The FMLA also permits eligible employees to take up to 12 weeks off from work per year because their spouse, child or parent who is in the National Guard or Reserves has been called to active duty, or has been notified that they are about to be called to active duty. This is called a "Qualifying Exigency Leave." It allows qualified employees to take time off for situations such as:

Generally, employees who take an FMLA Military Caregiver Leave or a Qualifying Exigency Leave are entitled to return to their job, or an equivalent one, when they return to work.

The New Jersey employment lawyers of Rabner Baumgart Ben-Asher & Nirenberg, P.C. are experienced at protecting the rights of employees. To schedule a consultation to discuss your legal options, you can contact us online or call us at (201) 777-2250.