What Is a Constructive Discharge? 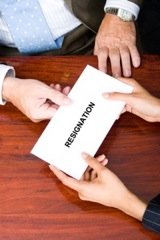 In both New York and New Jersey, a constructive discharge occurs when, instead of firing you, your employer makes things so hostile that you are forced to resign. As the New Jersey Supreme Court has put it, a constructive discharge occurs when a company makes things "so intolerable that a reasonable person would be forced to resign rather than continue to endure it."

The circumstances leading to a constructive discharge have to be more than unpleasant. They have to be outrageous, coercive, or unconscionable.

When Is a Constructive Discharge Legally Actionable?

For example, you can bring a constructive discharge claim if you are forced to quit as a result of harassment because of your age, color, gender, disability, marital status, national origin, pregnancy, race, religion, sexual orientation, veteran or military status, or another legally protected category. Similarly, a constructive termination would be legally actionable if it is the result of unlawful retaliation or a violation of your rights under the Family & Medical Leave Act ("FMLA").

Similarly, it is easy for someone who did not live through the situation to second guess whether you gave your employer enough of a chance to correct the problem before you quit. This is especially true when the employer claims the work environment was not nearly as bad as you believe.

Am I Entitled to Unemployment Insurance Benefits if I Am Forced to Quit?

This is similar to the constructive discharge standard, but applies only to reasons related to the job. It does not include personal reasons for quitting such as lack of transportation, lack of housing, childcare issues, attending school or relocating for personal or family reasons.

Consider Contacting an Employment Lawyer Before You Resign

There are certainly circumstances in which an employee should quit immediately, such as if returning to work is likely to result in suffering a physical injury or other serious harm. However, in most other situations where you believe you are being constructively discharged, it is a good idea to contact an employment lawyer to discuss your situation before you quit.

If you would like to schedule an appointment with one of our employment lawyers, please feel free to either contact us online or call us at (201) 777-2250.

For more information, please read our blog article: What is a Constructive Discharge?