Discrimination at work is illegal. More specifically, it is a violation of your employment law rights if your company has fired, demoted, harassed, disciplined or taken another adverse employment action against you because you are a member of a legally protected group.

What Forms of Discrimination Are Illegal?

For example, as our New Jersey discrimination lawyers can explain, in New Jersey the law prohibits employers from treating you worse based of your membership in any of the following categories: 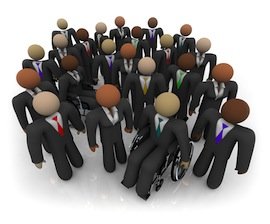 If you have been wrongfully fired, constructively discharged, demoted, suspended, or otherwise treated less favorably because you belong to one of those legally protected categories, Rabner Baumgart Ben-Asher & Nirenberg, P.C., can help.

In addition to successfully representing employees in a wide variety of employment law cases, our discrimination attorneys have helped improve the law for employees through numerous significant legal victories.

Contact an experienced employment lawyer at Rabner Baumgart Ben-Asher & Nirenberg, P.C. for more information about your workplace rights. Our telephone number is (973) 744-4000.

Contact Us
Search
Practice Areas
Employment Law Newsletter
New Jersey Employment Lawyer Blog - Discrimination
Client Reviews
★★★★★
"I worked with Jonathan Nirenberg, ESQ on a sensitive emotional employment matter. Mr. Nirenberg was quick to respond, offered excellent advice, and always followed up with phone calls or emails when needed. My situation was settled out of court within a short period of time with the best possible results for not just me but also for the employer. Highly recommend and would seek his help again if needed..." Linda Busch, PhD
★★★★★
"We've had the pleasure of working with Jonathan on multiple individual and class employment cases. Jonathan is a skilled, dedicated and caring attorney that works diligently to bring justice for his clients. We would recommend Jonathan as a legal resource for any employment cases." Stephan Zouras, LLP
★★★★★
"I felt alone and without a voice, until I hired Jonathan I. Nirenberg of Rabner Baumgart Ben-Asher & Nirenberg, P.C. Mr. Nirenberg represented me in an employment matter. Without his help, I know that I would not have had the extremely successful outcome I had. Jonathan was not only professional, but very empathetic to what happened to me. Jonathan gave me support, and options in relation to a challenging employer/employment situation which was an extremely difficult time in my life..." Shelly Smith
View More
Submit a Law Firm Client Review