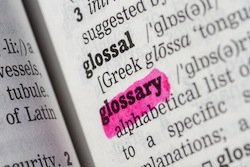 We realize lawyers often use legal terms (or “legalese”) that you might not be familiar with. To help, we have provided this glossary with simple definitions of some of the most commonly used employment law terms.

Adverse Employment Action: An adverse employment action is something significant and negative that happens to you at work, such as being fired, demoted, passed over for a promotion, or not being hired in the first place.

Alternative Dispute Resolution: A way to resolve a legal dispute outside of the court system, such as arbitration or mediation.

Appeal: An appeal is the part of the legal process in which a party asks another judge (or group of judges) at a higher level court to correct an error or mistake by a lower level court.

Arbitration: An alternative to litigation in which one or more arbitrators are hired to decide a case instead of a judge or jury. For more information, please see our arbitration page.

Back pay: Damages for past lost salary and benefits up to the date of the trial.

Constructive Discharge: A constructive discharge is when you quit your job because your working conditions are so hostile or intolerable that a reasonable person in your situation would feel compelled to resign. It is legally actionable if it occurs because of a legally prohibited reason.

Defendant: The party being sued in a lawsuit. In an employment law case the defendant usually is your current or former employer. In some cases there are other defendants such as your former supervisor and other employees who participated in harassing, discriminating or retaliating against you.

Employment At-Will: Employment at will is the default rule that you can be fired or you can quit your job for any reason or for no reason at all. Fortunately, there are lots of exceptions including employment contracts, discrimination and retaliation.

Employment Law: The set of legal rights belonging to most employees, including anti-discrimination, anti-harassment and anti-retaliation laws.

Front pay: Damages for lost salary and benefits into the future after the date of the trial.

Harassment: In general, harassment is annoying or bothering someone else. In employment law, to be legally actionable harassment has to be (1) either severe or pervasive (frequent) and (2) caused by your membership in a legally-protected category.

Labor Law: The set of laws that protect members of labor unions, including rights under the National Labor Relations Act ("NLRA") and a union’s collective bargaining agreement ("CBA").

Litigation: Litigation is the process that begins with the filing of a lawsuit (or “Complaint”) and ends when the case is settled or finally resolved. Litigation is often followed by an appeal.

Mediation: Mediation is a process in which the parties hire a neutral third-party mediator to help them settle a legal dispute. It is different from litigation and arbitration since the mediator does not make any rulings or decisions.

Mitigation of Damages: An effort to replace your economic damages, typically by finding another job in a wrongful discharge case. For more information, please see our blog article:  Mitigation of Damages: Employees Bringing Wrongful Termination Claims Must Make Reasonable Efforts to Find Another Job.

Non-Compete Agreement: A non-compete agreement is an agreement that you will not to work for a competitor or competing business after leaving the job.

Non-Solicitation Agreement: An agreement not to solicit or hire a company’s clients, customers and/or employees for a period after leaving the job.

Plaintiff: The person bringing a lawsuit. In an employment law case the plaintiff usually is an employee or former employee who claims his employer violated his legal rights.

Prima Facie Case: The basic elements to prove a discrimination or retaliation claim. Typically, the elements include proving (1) you are a member of legally-protected category, (2) you applied for or held a position with the employer, (3) you suffered an adverse employment action, and (4) the circumstances are otherwise consistent with discrimination.

Quid Pro Quo: A Latin phrase meaning “this for that.” It is used to describe sexual harassment in which a job or another benefit is conditioned on participating in a sexual relationship or providing sexual favors.

Restrictive Covenant: An employment contract that limits what you can do in the future. The most common restrictive covenants include non-compete, non-solicitation and trade secret agreements.

Severance Pay: Payments after you leave a job to compensate for your past services. Severance pay varies from company to company, but often is based on one, two or three weeks’ of pay per year you worked for the company.

Whistleblower: Someone who objects to or complains about an apparent violation of law, crime or other misconduct. Numerous laws protect whistleblowers from retaliation at work.