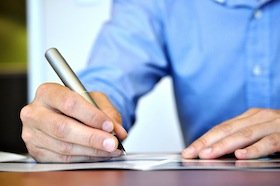 Non-competition agreements are contracts in which employees agree not to work for a competitor for a particular number of months or years after leaving their current job.

In both New York and New Jersey, non-compete agreements are supposed to protect the employer's trade secrets and confidential information, and to give the company time to recruit and train a replacement. But in practice they also limit the employee's ability to find another job, negotiate a raise with their current employer, or earn a living.

Any agreement that contains a non-competition or non-solicitation clause requires you to give up important rights and limits your future career options. Before you sign an employment contract, employee handbook, severance agreement or another document that includes a restrictive covenant, you should make sure you fully understand how it might impact you now and in the future.

Since employer usually draft non-compete agreements, they typically are extremely broad and unfair to the employee. For example, they might prohibit you from working in your field or line of work for an unreasonably long period of time, define “competition” in an overly broad way, or cover too wide a geographic area.

While a court eventually could rule that your entire non-compete agreement is unenforceable because it contains one or more unreasonable provisions, more often a judge will reduce or modify the restrictions to make them reasonable. In the meantime, potential employers are much less likely to offer you a job.

As a result, it is extremely important to speak to an experienced New Jersey non-competition agreement attorney before you sign a non-compete agreement or another restrictive covenant. We can advise you about the risks of signing the agreement and help you negotiate more reasonable terms.

New York and New Jersey courts generally disfavor overly broad and unreasonable non-compete agreements. In fact, in New York they can be unenforceable if you are fired or otherwise involuntarily lose your job, such as if you were laid off as part of a reduction in force.

Whether you are an executive, a salesperson, or work in another field, with an experienced employment lawyer you may be able to successfully defend against a non-compete lawsuit, or to negotiate a resolution with your former employer that allows you to work for one of its competitors.

Our law firm is a leader in employment law. Through our work on numerous significant and precedent-setting cases, we have changed the law and improved conditions for employees throughout New Jersey.

If you have been sued or threatened with a lawsuit relating to a non-compete agreement, want to know whether your contract prevents you from accepting a job offer, or are considering signing an employment contract or severance agreement that contains a non-compete clause, Rabner Baumgart Ben-Asher & Nirenberg, P.C. can help.

To schedule an appointment with a New Jersey non-competition agreement attorney, please contact us online or call us in New Jersey at (973) 744-4000