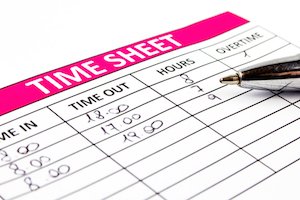 Under the federal Fair Labor Standards Act ("FLSA"), as well as both New York and New Jersey overtime laws, most employees are entitled to be paid time-and-a-half when they work more than 40 hours in a particular week.

Am I Entitled to Overtime Pay?

Not every employee is legally entitled to receive overtime pay. Rather, there are many exceptions and exemptions to the requirement.

The three primary exemptions from the overtime requirements are for Executive, Administrative and Professional employees. These categories have somewhat misleading names and are fairly narrowly defined. More information is available on our minimum wage page.

Salaried Employees Can Be Entitled to Overtime Pay

Regardless of how you are paid, you are entitled to be paid time-and-a-half for your overtime hours each week in which you work more than 40 hours unless you fall into an exempt category. Otherwise, companies would be able to avoid paying its employees overtime just by paying them a salary instead of by the hour.

Compensatory Time Off Generally Is Not a Substitute

Private companies are not permitted to give employees paid time off instead of paying them time-and-a-half for their overtime hours. In other words, they cannot offer compensatory time instead of overtime pay.

However, in both New Jersey and New York, state and local government employers can offer employees the option of compensatory time instead of being paid time-and-a-half for their overtime hours.

Overtime Pay Based on Company Policies and Agreements

Even if you are not legally entitled to overtime pay under state or federal law, some companies have more generous policies. Likewise, employees may be entitled to be paid extra for their overtime hours based on their employment contracts or offer letters.

For instance, some companies voluntarily agree to pay their hourly employees time-and-a-half before they have worked 40 hours per week, or for working on holidays or weekends. Other companies count paid breaks toward their hours worked when calculating overtime pay even though there is no legal obligation to do so. These policies and agreements often are legally enforceable.

Employers often take advantage of the fact that it can be complicated and confusing for employees to determine if they are entitled to overtime pay. Other employers do not understand wage and hour laws correctly.

Either way, if you believe your employer is not paying you all of the wages to which you are entitled, and would like to schedule an appointment with one of our New Jersey overtime lawyers, you can contact us online or call us at (973) 744-4000.