Protecting the
Rights of Employees
Contact Us Now
For a Consultation
Home
Attorneys
S. Robert Allcorn 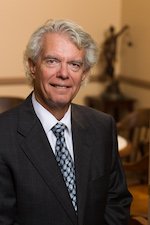 S. Robert Allcorn was a founding partner of our firm. He had extensive experience in complex commercial litigation, employment and matrimonial matters for more than 30 years.  Sadly, he passed away on January 7, 2023.

In addition to practicing law, Mr. Allcorn taught litigation strategy at law schools, serving as an adjunct professor at Rutgers School of Law, Newark and Benjamin Cardozo School of Law in New York City. He also taught other attorneys in various capacities. For instance, he was on the faculty of the National Institute of Trial Advocacy and Professional Education Systems, Inc. Mr. Allcorn authored numerous articles on litigation issues, as well as the “Discovery” section of the New Jersey Practice series (Thomson Publishing Co.).

Mr. Allcorn was AV® Preeminent™ Peer Review Rated — the highest rating in legal ability and ethical standards — by Martindale-Hubbell® for more than 25 years. For a description of the selection methodology for Martindale-Hubbell, please click on the link.

Mr. Allcorn was appointed to the Supreme Court Civil Practice Committee, serving as chairman of the Discovery Committee, as well as on various subcommittees (Pro Hac Vice; Dispositive Motions; Discoverability of Experts’ Draft Reports) and was a member of various committees of the American Bar Association and the New Jersey Bar Association.

More recently, Mr. Allcorn concentrated his practice primarily in mediation. He was a professionally trained mediator and a Superior Court Approved General Mediator, Matrimonial Mediator and Foreclosure Mediator. Having successfully concluded hundreds of mediations, he achieved the status of Accredited Professional Business Mediator which was bestowed on him by the New Jersey Association of Professional Mediators. He was assigned by numerous judges and recommended by many attorneys to mediate complex cases and was approved as a mediator by the American Arbitration Association, where he was a member of the New Jersey Commercial Advisory Council of that organization. He is also was a member of the Association for Conflict Resolution. Mr. Allcorn also was appointed by courts to serve as an arbitrator, fiscal agent and discovery master.

Mr. Allcorn earned his J.D. at Rutgers School of Law, Newark, and his B.A. at Carleton College. He was included in N.J. Biz Magazine as one of “New Jersey’s Top Mediators” and Who’s Who in American Lawyers.